This is an editorial opinion article written by Richard Lockwood, a real estate agent active in the Portland Metro area. This article makes no effort to assure anyone of future capital gains or losses. For further inquiries please see disclaimer at bottom of page.

With first quarter housing market data in for the year 2014, one of the prime factors having a stark impact on the housing sector for Portland is the lack of available residential real estate inventory. RMLS data (graph on the left ) shows lower inventory in the year 2014 (marked in red) as compared to the two years prior. The simple law of supply and demand points out that reduced inventory of available homes for sale will bolster increased home values. However, there comes a point when lack of supply will not have enough influence to buoy prices if sufficient other real estate indicators coalesce to negatively influence values. The optimists in my field believe that low inventory will trump out increased poverty and other economic woes and lead to neutral or positive home price trends. I believe that a more circumspect assessment points to at best a neutral market and at worst the real possibility of a double-dip recession. 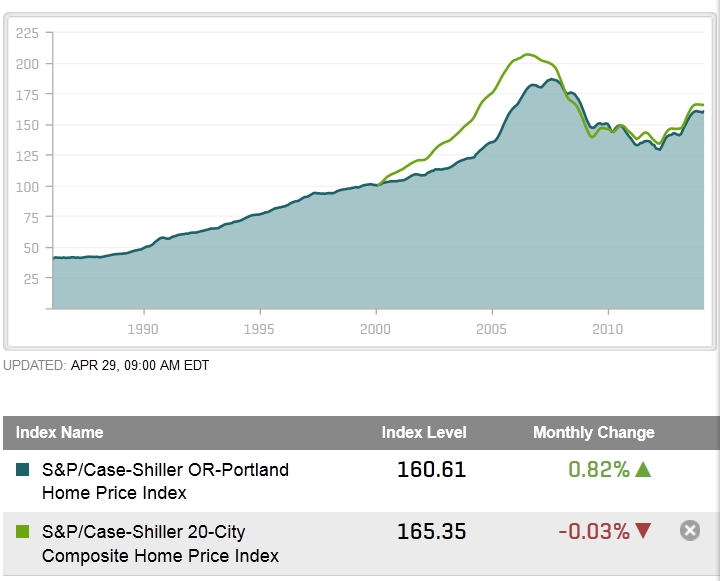 The Portland Case Shiller Housing Graph indicates that nationally housing may be reaching a plateau and Portland is closely following that trend. Low inventory is creating a vacuum where buyers find themselves locked in bidding wars on available MLS listings. Sellers meanwhile, find themselves pushed to offer prices lower than they would like because the wider economy simply won’t support higher values. Those who would like to believe that housing will continue to rise and quickly return to pre-crash levels need to address this question: If 2006’s economy could not support its home values, how can 2014’s incomplete and stuttering recovery ever hope to support yesterday’s bloated and inflated prices. History’s lessons point out that values can’t sustainably match 2006’s prices until our national economy is much more robust than it was in 2006 (2006 was the national housing peak, Portland’s peak and crash was a delayed response that came in 2007-2008).

The Case Shiller Portland Housing Graph shows the national housing boom roughly 20 points higher in the peak of July, 2006 than Portland’s peak; whereas now our city is in line much closer to the national average (20 city composite) than it was previously. The graph also shows how our city “chased the market down” during the crash years where the national index fell in advance of Portland’s crash. The fact that Portland is now much closer to the national average than it was pre-crash leads some agents & brokers to wonder if the local market is overpriced. One important factor to consider is this: has our city’s economy truly had a fundamental and radical shift as compared to the rest of the nation? Or, is our market overdue for a shift back to being 20 points below the nation’s top markets and also following two years behind the national trends as was previously the case. The national housing sector appears to be settling and if the past is any indicator of the future then our local market may be pulled down as well.

According to CNN-Money’s Recent Publication, American poverty is on the rise. The CNN Article also states that average yearly household income is stuck at around $51,000 per year while 15% of Americans live in poverty. The article also goes on to state that in the year 1999 American households averaged around $56,000 per year when adjusted for inflation. The fact that the average American household income is lower than it was over a decade ago begs the question of how our economy can support today’s higher home prices.

According to the aforementioned Case Shiller report, today’s home values are roughly 60% higher than in 1999 to which some Realtors ask: “how can Americans with lower incomes afford housing that has increased 60%?” The bursting of the housing bubble answered that nobody could afford it; and yet prices have yet again resumed their steep rise after the crash. It may behoove the cautious investor to consider that perhaps the housing-crash prices were the correct prices and the last few years’ increases are the inflation of tomorrow’s bubble.

Economists, Wall Street gurus and leading professors have been attempting to come to grips with the recent economic downturn aka “The Great Recession.” One thing that stands out as a key factor is the dramatic rise in the number of Americans living in poverty. As a Realtor I’ve asked myself on multiple occasions when perusing MLS listings: “Where are all of the millionaires lining up to buy this property?” The answer is that wealth in America has become increasingly concentrated, the middle class has shrunk and our society is moving toward a much more stratified socioeconomic structure. The sharp increase in poverty closely matches the sharp increase in post-recession home values which raises a number of red flags. Rising home prices and a rising number of people who cannot afford to buy a house seems to be an unsustainable real estate trend.

As a licensed real estate broker involved in short sales I see a myriad of purchase contracts come across my desk and one thing I’ve seen increase in recent years is the ratio of “investor offers” vs buyers intending to owner-occupy. With some of my listings, I have seen as many as five investor offers come in for every one actual home buyer looking to live in the property. And, while my experience is not enough to draw a scientific conclusion it certainly raises questions. From what I’ve seen in my own portfolio it does appear that investors are driving up prices. I’ve personally witnessed many instances where speculators bid against each other in Portland’s short sale market and also outbid owner-occupied buyers. And, although my own experiences may be statistically insignificant by themselves, I’m not alone in my assessment of coming market instability. Yale professor Robert Shiller has recently expressed his sentiment that while there’s quick cash to be made in flipping, homes as an investment may be a non-starter (Nightly Business Report: Shiller Bearish on Housing Investment).

A cursory examination of the Portland median & average sale price graph shows another very disturbing trend: that values appear to be increasing at a very close trajectory to the price increases of the boom years. As shown above by the lack of growth in jobs, the economy and average household income, it seems unlikely that this level of “appreciation” can be sustained. “Appreciation” is placed in quotation marks because there is no indication that the economy has the strength to actually support these increased prices. In summary, the steep ramp-up of home prices during the 2000’s is now viewed as a harbinger of the coming crash: perhaps today’s similar ramp-up can be viewed the same way.

For now it appears that real estate prices in Portland, Oregon may be on an unsustainable upward trend. Unsustainable, because the economy, jobs and wages are not increasing in any way that matches property price increases. For housing to sustainably go up in cost American household incomes also need to rise proportionally.

Disclaimer:
*This article is opinion and does not constitute any prediction of future profits/losses, investment advice or legal advice whatsoever. I am not an attorney, I am not a tax professional and I am not an accountant. I am a real estate broker licensed in the state of Oregon.