Numbers for pending and sold homes throughout the Portland metro area are cooling off with the return of the school year and the end of the (traditionally busy) summer real estate buying season. The seasonal fluctuation of the local Oregon housing market is normal and may be influenced by such factors as family’s school year, increased vacation time in the summer in addition to buyers being more apt to shop for homes during summer’s longer and warmer days/evenings. The biggest story in real estate for this season seems to be consistently low inventory of available homes for sale in Portland, Oregon. The year-on-year graph to the left clearly shows 2015 in red with September, 2015 showing only 5,657 active listings compared to 7,438 available properties for the same month a year previously. This represents a 24% drop in available homes in Portland and may help quantify the climate of angst felt amongst buyers trying to secure a home of their own (and also the stress placed on agents helping buyers find a place to live).

A Tail Of Low Inventory 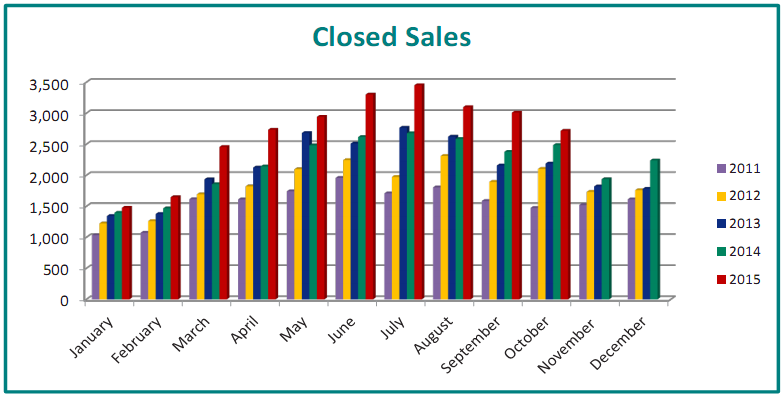 Why is inventory at/near such record lows? The graph to the right indicates that in this case decreased inventory may be closely correlated to increased purchasing activity. The fact that the reduction in available inventory of homes for sale is almost inversely proportional to increased demand from buyers lends weight to the argument that home price increases in the Portland Metro are based on sound economic fundamentals. Of course, if the housing recovery stalls on a national level we may see that put downward pressure on home values locally. One interesting question is how Portland’s housing market would respond in the theoretical event of upward local price pressure moving against a national trend of settling or reducing values. As with most things it would probably be a matter of the degree to which the metro area market went against the national housing trends.

Dissecting the details of the economy and how the broader financial picture affects our Portland real estate market is beyond the scope of this editorial/opinion piece. That said, it’s worth perusing some of the Wall Street headlines because economic indicators can be an early warning system to possible storm clouds just over the horizon. Investor’s Business Daily summed up our current economic situation by stating that “GDP (Gross Domestic Product) Growth Slows But {the} Job Market Stays Hot”. It should be noted that the job market in Portland might be described as exceptionally hot. In any case, the article goes on to cite data that our nation currently has the lowest unemployment figures witnessed since December of 1973. Despite this positive news, wages still appear to be somewhat stagnant. Gross Domestic Product falling short of forecast levels has led to some concern however unemployment remains exceptionally low. The upcoming Christmas/Holiday buying season and how retailers fare should give a bit more insight into the health of the economy as well as consumer-spending habits. It remains to be seen as to whether low unemployment levels be enough to buoy consumer spending.

One of the biggest concerns facing today’s Portlanders is the influx of affluent transplants and how this has affected home values. Yes, the housing market has improved nationally but average local wages haven’t kept pace with Portland’s meteoric rise. In this sense, the national housing market only has a little to do with Portland’s situation in that many of the city’s neighborhoods have fundamentally changed due to gentrification. There’s an interesting first-person perspective on the topic of gentrification in a recent Willamette Week article. In the article, a local artist recounts her move into Portland in the early 2000’s and details the waxing and waning of her time in the city. The artist recounts the cultural impact that she made on the city and also how the local scene helped shape her and her art. Unfortunately, a surprising number of local artists and associated eclectic businesses have fallen victim to the area’s increased popularity, giving way to an increasingly corporate feel that risks a loss of our town’s celebrated “weird” milieu. It should be noted that this loss of uniqueness is resented by many longtime residents. Perhaps ironically, the delightfully unique local artistic culture is being stifled by gentrification resulting from popularity. Of course, those lamenting today’s gentrification may do well to bear in mind that many of those currently being priced out of certain neighborhoods once displaced another generation of residents in previous decades. Perhaps painfully, we Portlanders have made our bed and many of us can’t afford to lie in it.

In any event, there seems little alternative than prices increasing so long as inventory of homes for sale remains so low. March of 2015 seems to mark a quantum shift when inventory of available residential properties dipped below two months of inventory and has remained at those critically low levels for the last eight consecutive months. Hopefully, the local housing market pauses over the winter so that inventory of available residential homes has a chance to build up a little bit. While quickly increasing home values may sound like good news to those who currently own please realize that those who sell may be facing increased prices and a dearth of inventory when they go to purchase, which can make the boon of selling high ring a little hollow for many. It’s also important to note that at some point runaway price increases may lead us into a newly forming housing bubble.

With all the news about quickly rising home prices it may surprise some to learn that we still have a significant amount of short sales in the Portland metro area. Yet, a certain number of properties remain mired in years of late fees, home equity lines of credit (HELOC) and various other liens. Many borrowers who were approved for loan modifications a few years ago still find it difficult to make sense of budgets and may be saddled with higher payments as a result of loan restructuring. It’s worth pointing out that every month that goes by on a defaulted loan increases the balance owed due to continually accruing penalties. Some of these properties may have increased in value enough to cover the original loan balance owed but when late penalties for several years of missed payments are factored in the property remains “in the red”.

As a short sale specialist in Portland, Oregon I recently got to see the long-term benefits of doing a short sale firsthand. A past client had recently passed the 24 month mark since their short sale closed and as such she again qualified to purchase a new home. While I’d like to claim credit for completing the short sale, the client deserves all the praise for working hard and making smart moves to quickly rebuild her credit. To that end, this client recently got the keys to her new home and has successfully rejoined the ranks of happy home owners in just over 24 months. Hats off to all of our amazing clients and even though we can’t mention names due to client confidentiality reasons, we’re proud to be a part of her accomplishments.

If you have a loan mod that is in danger of defaulting or if you started getting foreclosure notices in the mail, don’t hesitate to contact us to learn more about what a team of experienced and dedicated short sale specialists can do for you. There are zero up front fees and our only compensation is out of the bank’s settlement…. We don’t get paid until your short sale is approved. Call us to learn more.