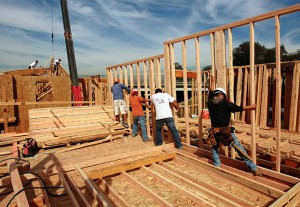 Lately there has been a large rise in apartment construction and housing permits issued (primarily due to the large increase in the number of apartment permits issued). This created more work for home builders and the hope that the housing market will improve. The rate, which is seasonally adjusted, at which home builders broke ground on new homes in November is at the highest level since April of 2010. This rate, of 685,000 homes, represents a 9.3 percent increase from the rate in October (which was 626,715 homes). Although this is still far below the level of 1.2 million homes that economists say represents the annual rate in a healthy housing market, Portland buyer agents say it indicates that the housing market may be taking a turn for the better. The communities page has updated homes for sale for the entire Portland metro area.

New homes account for only 20 percent of the housing market, which would lead you to think that they do not have a very prominent effect on the overall economy. Realtors report, however, that each new home built creates an average of 1 year’s worth of three jobs and $90,000 in taxes. Portland real estate agents do warn that although the rate of production of new homes is increasing, the rate at which people purchase these new homes is decreasing. The buyers are instead either purchasing foreclosed homes and short sales, or becoming renters and renting homes.