Federal Reserve Economists are questioning the effect of retirement age baby-boomers on stock values. Economists trace stock market gains in the 1980’s to baby-boomers preparing for retirement and now believe that the trend will reverse as retirement-age boomers sell stock to cover expenses. Tracking the boomers’ effect on the economy has predicted market action in the past with foretold increases in consumer spending in the 1990’s as the boomer generation entered their most productive wage-earning years. And, as in the 1980’s, the 90’s were a time when boomers also put money into Stocks, Bonds and Mutual Funds. Now that the boomers are retiring it seems a foregone conclusion that boomers will be periodically withdrawing from their retirements by selling off portions of their investment portfolios on a regular basis. Others speculate that at least a portion of the early 2000’s housing bubble may have been brought on by boomers having to progressively nicer homes. 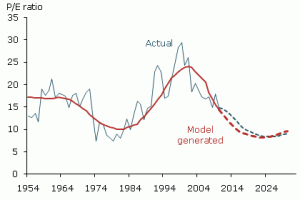 How Will This Affect The Market?

The Rest of The Story

The study did not take offshore investors into account and how newly industrialized economies such as China and India will affect the US Economy as demand for US Stocks from offshore investors rises. Also, factors such as Federal Reserve Interest Rates affect stock prices as investors seek higher yields than may be offered by low interest bonds.